On this project I worked as a level designer and 3D environment artist.

The project consisted of a single level split into three areas: A camp area,

a forest area and a dream area. As the level designer I was tasked with

unreal 4 engine. The project was an interactive experience where a

a portal at the end of the level. 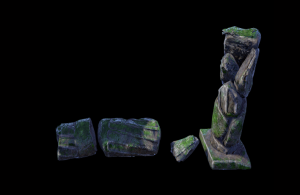 During this project I also created lots of assets including trees,

torches, ruins, rocks and many other environmental objects.

I also created the shrines and floating rock platforms in the

The team was small and we had to be consistent in art style.

This led to us adopting similar texture and modelling techniques.

I learnt a lot from working on the various ruins. I found that the trick

to good ruins is to have believable destruction, so in order to achieve this

I left large pieces of broken parts and added wear around harsh edges. 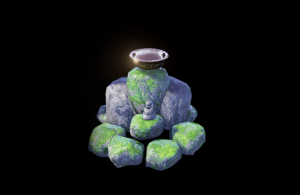 This project taught me to be consistent when working with others,

and texturing techniques. one interesting thing I did on this project was

to have different levels of moss in different areas, for example in the dream

area there is no moss as its in the sky but in the Forrest there is lots of moss.